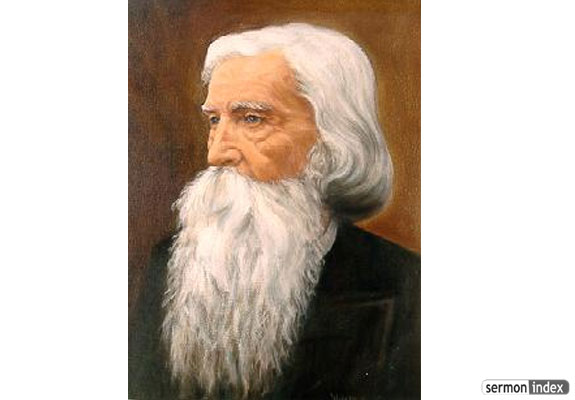 Taken from “Pioneering in the New Hebrides,” autobiography of John G. Paton (1824-1907), edited by his
brother James Paton. Copyrighted and printed 1898 by Fleming H. Revell Company.
As a missionary on the island of Tanna in the New Hebrides in the South Pacific, John Paton’s life was
often in peril because of the violent opposition of some of the natives to the Christianity he had brought to
them. The heathen darkness and the warring, killing spirit in which they lived blinded a good number of the
leaders and their people to the good intent of the missionary, and they determined to kill him or drive him
away.
One of His Teachers Attacked
“Namuri,” writes Paton, “one of my Aneityumese teachers (Christian converts from a neighboring island),
was placed at our nearest village. There he had built a house for himself and his wife, and there he led
amongst the heathen a pure and humble Christian life. Almost every morning he came and reported on the
state of affairs to me. Without books or a school, he yet instructed the natives in divine things, conducted the
worship, and taught them much by his good example.
“His influence was increasing when one morning a ‘sacred man’ threw at him the kawas, or killing stone, a
deadly weapon like a scythe stone in shape and thickness, usually round but sometimes angular and from
eighteen to twenty inches long. They throw it from a great distance and with fatal precision. The teacher with
great agility warded his head and received the deep cut from it in his left hand, reserving his right hand to
guard against the club that was certain to follow swiftly.
“The priest sprang upon him with his club and with savage yells. Namuri evaded yet also received many
blows. Rushing out of their hands, he actually reached the mission house, bleeding, fainting, and pursued by
howling murderers. I had been anxiously expecting him, and hearing the noise I ran out with all possible
speed.
“On seeing me, he sank down by a tree and cried, ‘Missi, Missi, quick and escape for your life! They are
coming to kill you! They say they must kill us all today and they have begun with me for they hate Jehovah
and the worship!’
“I hastened to the good teacher where he lay. I bound up, washed and dressed his wounds, and God by a
mystery of His own working, kept the infuriated Tannese watching at bay. Gradually they began to disappear
into the bush, and we conveyed the dear teacher to the mission house. In three or four weeks, he so far
recovered by careful nursing that he was able to walk about again. Some petitioned for him to return to the
village.
“The villagers appearing friendly for some time and willing to listen and learn, the teacher earnestly
desired to return to his post. I pled with him to remain at the mission house till we felt more assured, but he
replied:
“‘Missi, when I see them thirsting for my blood, I just see myself when the missionary first came to my
island. I desired to murder him, as they now desire to kill me. Had he stayed away for such danger, I would
have remained heathen, but he came and continued coming to teach us till, by the grace of God, I was
changed to what I am. Now the same God that changed me to this can change these poor Tannese to love
and serve Him. I cannot stay away from them, but I will sleep at the mission house and do all I can by day to
bring them to Jesus.’
“It was not in me to keep such a man, under such motives, from what he felt to be his post of duty. He
returned to his village work and for several weeks things appeared most encouraging. The inhabitants
showed growing interest in us and our work, and less fear of the pretensions of their heathen priest, which,
alas! fed his jealousy and anger.
“One morning during worship, when the good teacher knelt in prayer, the same savage priest sprang upon
him with his great club and left him for dead, wounded and bleeding and unconscious. The people fled and
left him in his blood, afraid of being mixed up with the murder. The teacher, recovering a little, crawled to the
mission house, reaching it about midday in a dying condition. On seeing him I ran to meet him, but he fell
near the teacher’s house, saying,
“‘Missi, I am dying! They will kill you also. Escape for your life!’
“Trying to console him, I sat down beside him dressing his wounds and nursing him. He was quite
resigned. He was looking up to Jesus, and rejoicing that he would soon be with Him in glory. His pain and
suffering were great, but he bore all very quietly, as he said and kept saying, ‘For the sake of Jesus! For
Jesus sake!’ He was constantly praying for his persecutors:
“‘O Lord Jesus, forgive them, for they know not what they are doing. Oh, take not away all Thy servants
from Tanna! Take not away Thy worship from this dark island! O God, bring all the Tannese to love and follow
Jesus!’
“To him, Jesus was all and in all, and there were no bands in his death. He passed from us in the assured
hope of entering into the glory of his Lord. Humble though he may appear in the world’s esteem, I knew that
a great man had fallen there in the service of Christ, and that he would take rank in the glorious army of the
martyrs.”
(To be continued)