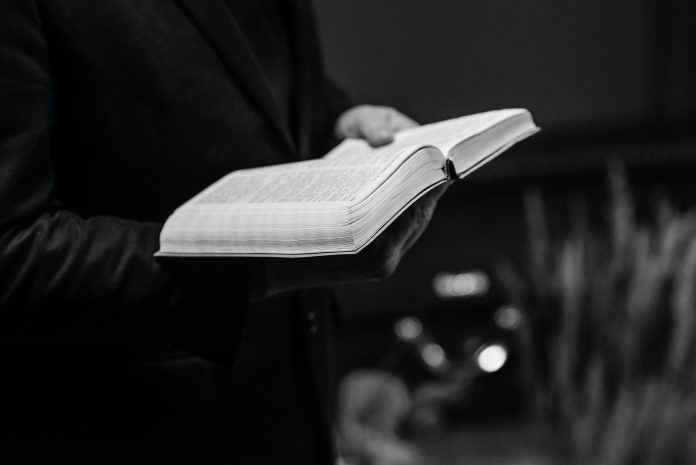 Taken from “Pioneering in the New Hebrides,” autobiography of John G. Paton (1824-1907), edited by his
brother James Paton. Copyrighted and printed 1898 by Fleming H. Revell Company.
Not until John G. Paton had received “marching orders” from the Lord Jesus Christ to give his life to carry
the Gospel to the sin-darkened islands of the New Hebrides – did he learn that at his birth his parents had
laid him, their firstborn son, upon the altar to be, if God saw fit, a missionary of the cross. Through the years
the secret prayer of their hearts had been that he might be “prepared, qualified and led” in that direction.
The full answer to this prayer came when John Paton left a thriving mission work in Glasgow, Scotland in
1858, against the advice of many who said that he would be throwing his life away, and set out with his wife
and another male missionary on the ocean voyage that landed them eventually on the South Sea island of
Tanna. Full well this brave party knew that the first two missionaries to arrive in these islands, some 20 years
earlier, had been instantly killed by the natives. A few years later, two missionaries were landed on this island
of Tanna. In less than seven months, they had to flee for their lives.
Undaunted, the London Missionary Society sent more missionaries to another island of the thirty-island
chain. God prospered their efforts. Could it have been because many prayers and tears had gone up to God
as a result of the previous experiences? On that island in a few years missionaries saw “about 3,500
savages throwing away their idols, renouncing their heathen customs, and avowing themselves to be
worshippers of the true Jehovah God. Slowly yet progressively they unlearned their heathenism; surely and
hopefully they learned Christianity and civilization. In course of time a simple form of family worship was
introduced into and observed by every household on the island; God’s blessing was asked on every meal;
peace and public order were secured; and property was perfectly safe under the sanctifying and civilizing
Gospel of Christ.”
It was to an island adjacent to this God-blessed island that John Paton and his wife were assigned. Full of
joy and hope, they set to work building their home on the site which had been occupied by the two
missionaries who had to flee for their lives. But within a few short months greatest sorrow struck. John
Paton’s beloved young wife, Mary Ann, succumbed to illness, and their infant son followed a few weeks later.
With breaking heart but sustained by the grace of God, his loving hands prepared a grave near the house
and tenderly laid them away.
Laboring on alone, John Paton had a morning church service established within a year. After the service,
he walked many miles, visiting all the villages within reach. Good numbers assembled to hear him as he
struggled to speak to them of the love of Jesus in a language that had not yet been reduced to writing. But
only a handful seemed to love and serve Jesus.
The main occupation of the men seemed to be war with neighboring villages and their chiefs. The women
were little more than slaves who did most of the work of sustaining the family. John Paton did his utmost to
reconcile the warring parties, and on many occasions he was able to turn the men aside from their killings.
He worked ceaselessly also to stop the beating of wives, the customary strangling of widows of men killed in
war, and the cannibalism that was deeply entrenched in their society. His kindness to the sick and injured
added to the number of friends he gained among them.
Some Withstood the Gospel
Among some of the chiefs and their villagers, however, there was strong opposition to the Gospel. These
were satisfied with the way they had been living, though their worship was one of fear and constant effort to
appease the evil spirits. This opposing element blamed the missionary and his God for the misfortunes that
came upon them. If dry weather befell them and ruined their crops, or if a hurricane swept in upon them,
destroying homes and flooding land, or if a plague of sickness took many lives – they attributed it to the
missionary and his God.
They further resisted the missionary because they had suffered much unjust treatment from the hands of
wicked white traders whose ships dropped anchor in their harbors, and they were seeking revenge against
anyone of that race.
For four years John Paton labored among the people of Tanna, bearing patiently and by the grace of the
Lord, sore trials that would have sent many another home in despair. He suffered frequent bouts with fever
and ague. He constantly had to bear the thievery, lying and betrayal of hearts benighted by sin. For days at a
time he could scarcely leave his house because there were those seeking to take his life.
He was given opportunity many times to move to another island and was urged by some to do so. But he
felt he could not leave these people in heathen darkness unless absolutely forced to do so. If he left, how
would they ever learn of Jesus and His love for them? How would they ever be saved? He would trust the
Lord to keep him there until his mission among these people was fulfilled.
(To be continued)